« Back to Artists Directory 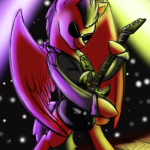 I am a not very well-known musician and voice actor in the community, but I have made friends with some well known performers. I've been able to work with names like TheLostNarrator, Carmen Mary Medley, Magpiepony, Ashley H, and Gloryoftherainwings, just to name a few. I was even able to include Lost and Carmen in my pony parody of Straight Outta Compton called Straight Outta Cloudsdale, which got a solo post on Equestria Daily. Another parody of mine has also made it onto a Top 10 Pony Songs of the Month countdown, namely my parody of Uptown Funk called Ponyville Funk. As for my voice acting side, I've been cast for a few roles in the community, but my most prominent role would have to be as Nova Shine, the lead character in the new audio drama, The Apprentice, the Student, and the Charlatan for TrueSailorComet.

This Artist on PVL!

A special thank-you to our supporters on Patreon: Let's Eat Hay! & Rainbow_Pepper!